Stewards excluded all Peugeots due to illegal side skirts. Peugeot took the matter to FISA in December who decided that exclusion had been illegal. All championship points of the rally were annulled and because of that, the 1986 Rally San Remo cannot be considered as an WRC event. 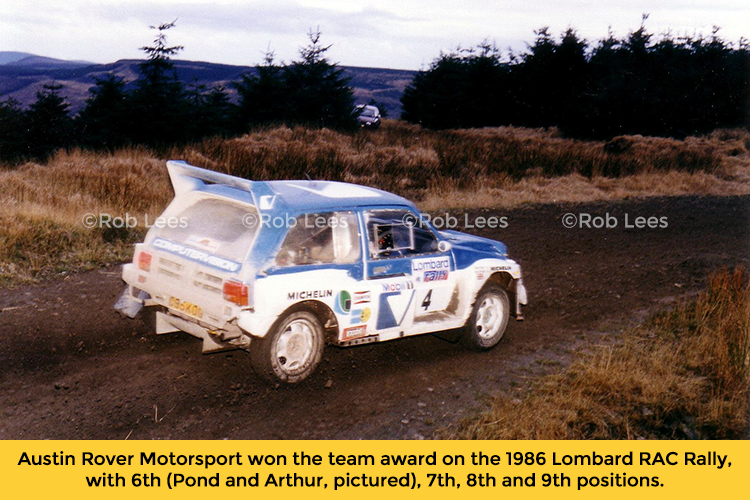 Two brand new Metro 6R4s were presented in Bradford for David Llewellin and Harri Toiven. The R-E-D prepared machines were prepared to full works specification with the exception being that both cars had synchro gearboxes instead of the usual straight cut options, there bring a greater supply of spares for the standard units at the time. Llewellin’s metro carried only Austin Rover decals for the event as a main sponsor was not forthcoming in time, but Toivonen’s car was backed by Unipart. Additionally, both R-E-D metros where using different tyre manufacturers, Michelin for Llewellin and Pirelli for Toivonen.
David Richards Autosport (now famously known as Prodrive) built a 6R4 from scratch at their workshop in Silverstone for previous British Rally Champion Jimmy McRae. Jimmy’s 6R4 was using the standard gearbox, and was powered by a Terry Hoyle built V64V engine. The David Richards Autosport prepared car received backing from Rothmans. Jimmy hadn’t driven this car before the start of the event although managed to test a works car in Portugal recently whilst the works Austin Rover Motorsport team were testing for the 1986 Rally of Portugal. 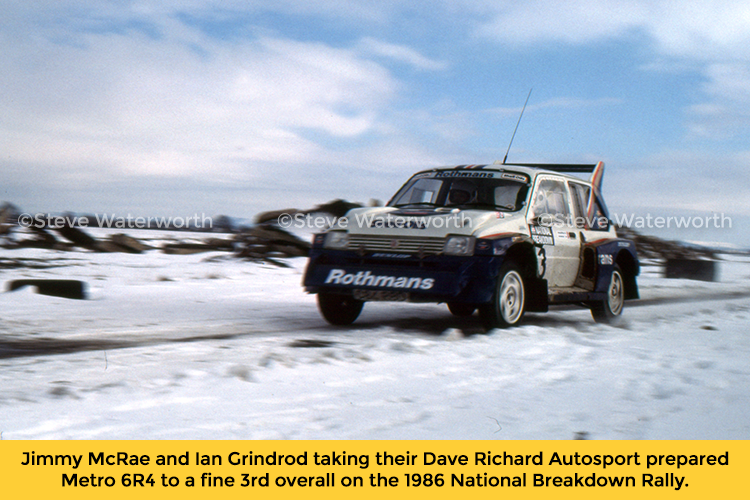 R-E-D were in Ireland testing before the Rally and were more than happy with the set up of their two MG Metro 6R4s. The usual factory supplied tarmac kit was retained with only minor modifications and both David Llewellin and Harri Toivonen’s cars would start the event with the regular 35/65 torque split and around 390bhp.
Jiimmy McRae’s Rothmans team car, run by David Richards Autosport, was in similar trim although the team admitted that softer rear suspension had been fitted following a test session with McRae. A different, softer, anti-roll bar was used according to Jimmy’s personal preference and the team anticipated the use of cooling ducts to the rear brakes for when the pressure was really on.
The main boost to all three cars was the acquisition of the works spec dog gearboxes for the first time. Each driver was allocated one such unit with which to start the event but, should it fail, the teams were left with only the standard synchro units (as used on the National Breakdown Rally) to fall back on. 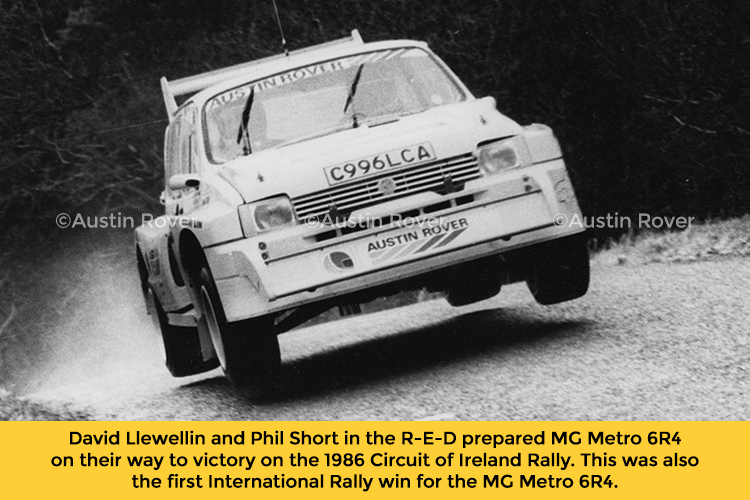 The two R-E-D run Metro 6R4s of David Llewellin and Harri Toivonen were both sent to Wales in basically the same specification as the Circuit of Ireland cars. For tarmac, however the cars would run with forest springs at the front and with tarmac kit at the rear, thus enabling some from of compromise over the very demanding Epynt military ranges. As the Austin Rover Motorsport team have been concentrating their recent development work with the 6R4 ready for the Corsica Rally, their efforts were of little use to R-E-D or David Richards Autosport.

By far the most popular pace setter at the start of the event was the Cowley built Computervision 6R4 of works driver Malcolm Wilson / Nigel Harris, who were adding further support to ARG’s regular representatives in the championship David Llewellyn / Phil Short. Then there were the works supported cars for Jimmy McRae / Ian Grindrod, Per Eklund / Dave Whittock, and Harri Toivonen / Neil Wilson, backed by privateers Mike Stuart, Ken Wood and David Gillanders.
Predictably, the specification of all these cars varied greatly, with Wilson - as the World Championship Team Member - honoured with the best possible car, to the latest ‘rough road’ specification featuring some redesigned suspension parts produced since the eye-opening test in Greece (for the Acropolis Rally) last month. Those led ARG to abandon entries on the Acropolis Rally, and the Cowley team is now halfway to producing their ‘Safari’ suspension, hoping to have it complete for the Mille Pistes in July.
There were a number of other detail changes, but the greatest interest was with the engine revisions, as Wilson had a brand new set of redesigned conrods in his V64V motor. Following the departure of David Wood it was felt that repositioning of the offset in the rods could ease some of the top end problems which crippled the car throughout 1986.
Most of the other Metros close to the factory did have the latest cam belt tensioners and guards, although it appeared that Toivonen’s car was at a disadvantage in this area. Despite all the effort however, Eklund’s car blew its engine on the testbed before the start of the rally, and so his Konrad Schmidt prepared car had to run a test unit for the rally.
R-E-D had a particularly busy time in the period before the rally, a bare shell arriving in Widnes just two weeks before the start, Llewellin’s Welsh shunt meant that this was the only course of action, the team taking the opportunity to fit larger pods in the rear windows feeding the now double oil coolers which lie high in the engine compartment to use more of the airflow and improve cooing, another of the Metros engine sicknesses.
A test session only a few days before the start convinced Llewellin that a 45/55, front/rear, torque split was the best solution, so that he joined both Wilson and Eklund with this set up; the rest settling for a 35/65 option, partially due to the lack on an available alternative.
A fascinating selection of tyre companies maintain their support of the various Metros, with the works cars using Michelin, Jimmy McRae running Dunlop along with Mike Stuart and Ken Wood; and others including Harri Toivonen and David Gillanders on Pirelli. 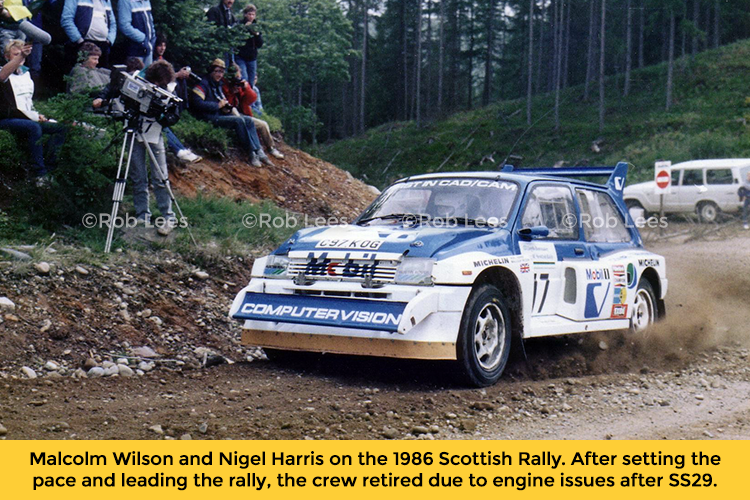 The R-E-D team arrived from their Widnes base, proudly displaying a brand new, lightweight MG Metro 6R4 for David Llewellin. The car was D registered and around 60kgs lighter than previous cars from the stable. The Welshman’s car was shod with 16 inch Michelins for the first time and was able to choose form a range that included a new, harder, wet cover. Harri Toivonen’s car was his usual mount, weighing in at the regular 980kgs.
Each car had been fitted with the K&N filters that had kept dust completely clear of the engine on the Marlboro Port Talbot Rally, when Willie Rutherford (Using a R-E-D built 6R4 in the national championship) was at the wheel, each car having the revised valve seats. Recent work on the cooling system saw the cars appear with the cross flow radiators and revised plumbing through the underbody tunnel to allow better airflow, further attention within the engine hopefully improving cooling within the V64V unit.
The Rothmans car of Jimmy McRae was apparently the same that has been used all season, although some will have noticed at least two different registration number on the David Richards Austosport run car. It too had the latest engine modifications and had been hastily re-prepared since its trip to the Cort Ingles Rally in the Canaries. Other Metros expected to figure in the placings dufing the event were the Castrol version of Mike Stuart and the Presspart car of Cyril Botlon.

The R-E-D team arrived to the Isle of Man for the last Rally of the 1986 Championship with the same cars that competed on the Ulster Rally for David Llewellin and Harri Toivonen. Tony Pond, ARG’s no.1 driver was contesting the event in a Cowley built lightweight 6R4, hoping that they can help Jimmy McRae’s title bid. The David Richards Autosport team turned up with 2 Rothmans Metro 6R4s, one for Jimmy McRae and the second for Irishman Billy Coleman. Also ready to tackle the stages was Cyril Bolton in his clubman version of the 6R4, and Mike Stuart in his Paul Windsor Cars Prepared metro. 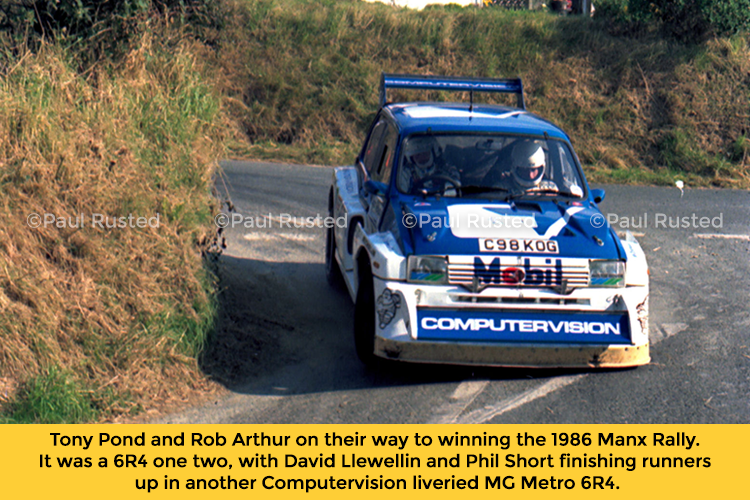 Other notable results in 1986 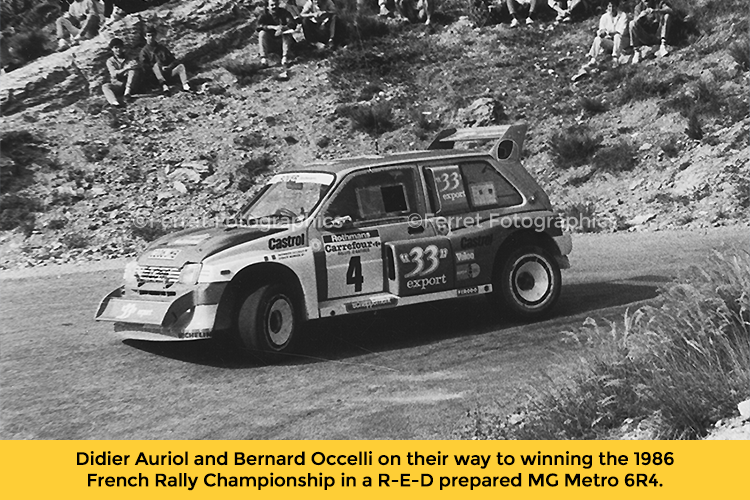 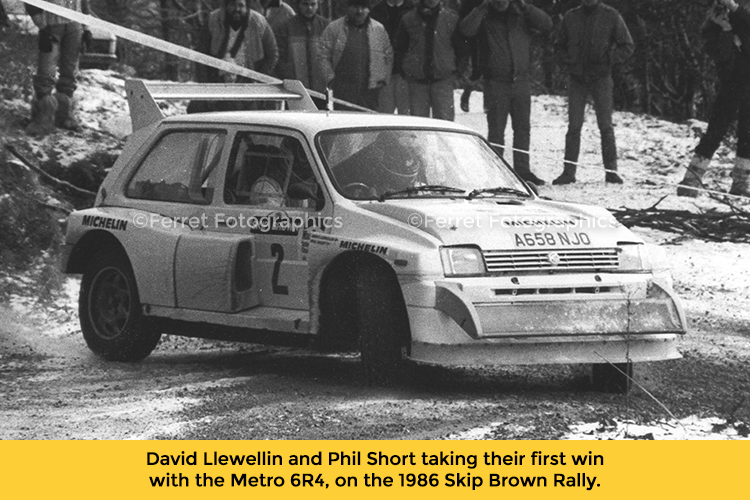 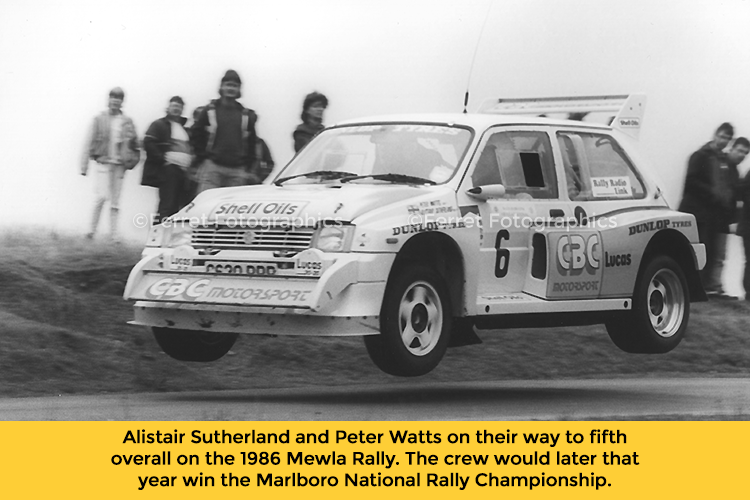 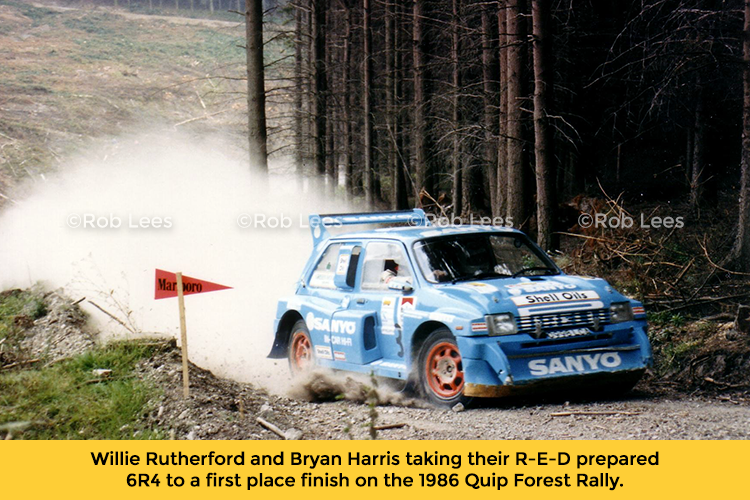 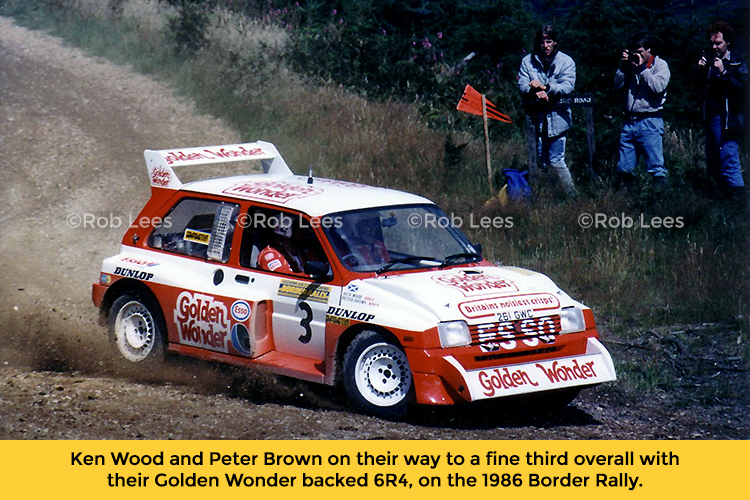