Williams GPE and the Metro 6R4

The Austin-Rover Metro Very High Performance Derivative (later re-named the ‘6R4’) has its origins in a coincidence of circumstances and the meeting of minds between 2 individuals from quite separate, and different, organisations. In 1980 Austin Rover Group Motorsport at Cowley, led by its Director, John Davenport, had no rally programme of their own on-going (the TR7 V8 cars had finished by then) but some funding available to explore a concept for a vehicle based on the new FIA category of Group B. It was judged, though, that moving up to that level of complexity would require considerably more engineering input than was currently available in-house. Simultaneously, Patrick Head, Chief Designer at Williams Grand Prix Engineering at Didcot, was looking for an external project which might provide some continuity and stability for the company should the political situation at that time in F1 (the ‘FISA-FOCA war’ then on-going and there was a real possibility that F1 would be suspended) prove detrimental to its future. After a meeting between the 2 men, the go-ahead from ARGM for Williams to produce a design was given in February 1981. 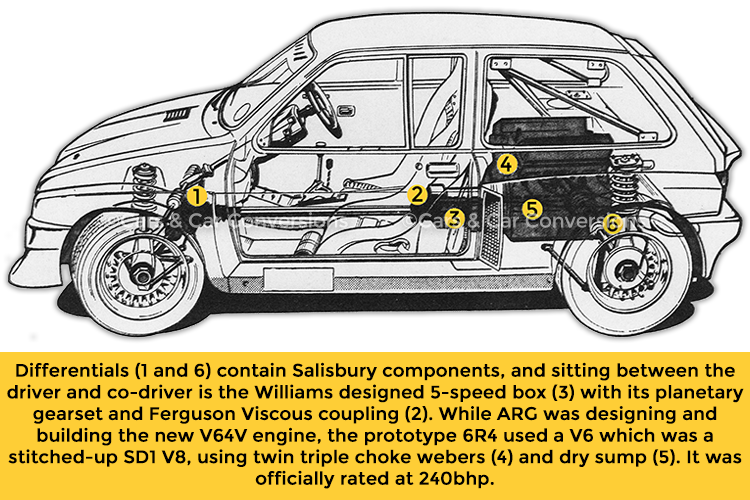 Pilot studies were commenced very soon afterwards and the programme went into full-time operation from late that year. ARGM oversaw the project from Cowley and also ran the power-plant development, headed up by David Wood and assisted by Bob Farley at Canley. At Williams, a permanent team of personnel worked on the vehicle design and prototype build: engineers John Piper (layout, transmission and suspension) and Brian O’Rourke (structure and bodywork) worked on design whilst the multi-skilled ex-F1 mechanics Ian Anderson (fabrication) and Derek Jones (machining) took care of the car build.

In terms of concept, John Davenport’s initial request to Patrick Head was to try and fit a V8 Rover block into the front of a Metro chassis! His response was to suggest something more realistic: a shortened block and mid-engine configuration. The real challenge, however, was to achieve this whilst preserving as much original Metro as was possible; rally cars were very much thought of as direct derivatives of road cars in those days. In terms of performance, the target was very simple: beat the best that were entered for Group B competition – which meant the Audi A1 Quattro. Following a mock-up construction, body-shell assembly began in mid-1982 leading to the first engine trial installation in December. The first full structure was shipped to Cowley immediately afterwards and car build commenced, culminating in the first test at Chalgrove airfield being conducted in on February 11th. in the hands of driver Tony Pond. 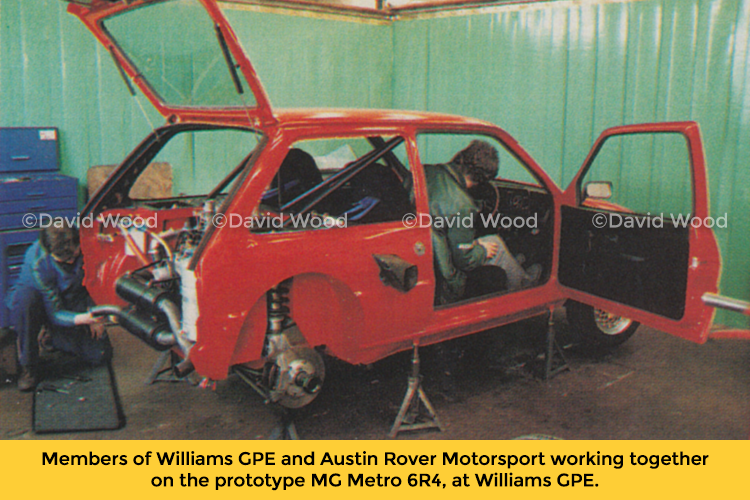 The weather conditions were less than ideal – slush (the worst combination for sensible evaluation) – but Tony pronounced himself very impressed with the 4WD system - the first that both ARG and Williams had been involved with – and the handling in general. 2 further chassis were built by Williams and numerous tests carried out at Chalgrove, MIRA, Cadwell Park and Gaydon before the project was handed over to ARG in August of 1983, prior to ‘loose’ surface development. Meanwhile, the definitive R64V engine – the initial cars had run with a Rover V8 unit cut down to make a V6 – was readied. The car was released to the press during February 1984 and the vital task of building the 200 chassis required for Group B homologation got under way. 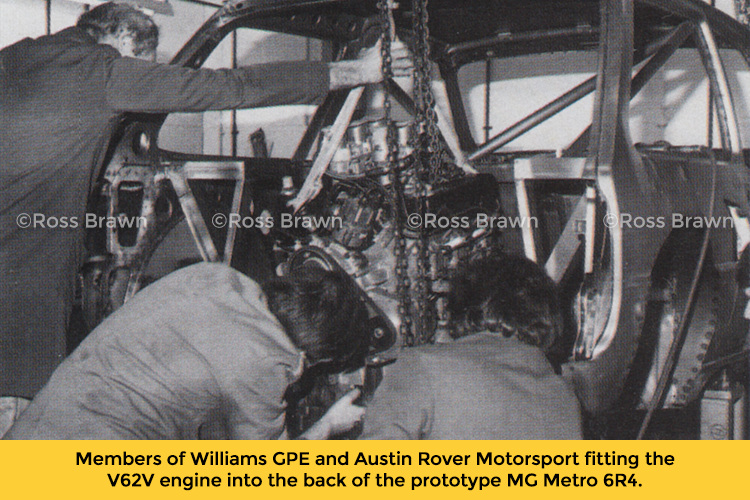 This would take, ultimately, until October 1985 to complete but, in the interim, the car was entered as a prototype in various national rally events – its first outing was the York National Rally in March. 1984 - to prove the concept and refine the design. The 6R4’s international debut finally came in the RAC Rally of November 1985 in which Tony Pond and Rob Arthur finished a close 3rd. to the pair of Lancia Delta S4 cars of Markku Alen and Henri Toivonen, these being on debut, also. [The 6R4 finished only 2 minutes behind the leader after 4 days and 912/ hours of special stages.] The Metro beat the nearest Audi Quattro by 24 minutes; design specification achieved! [What might have happened had the 6R4 have been ready a year earlier?] 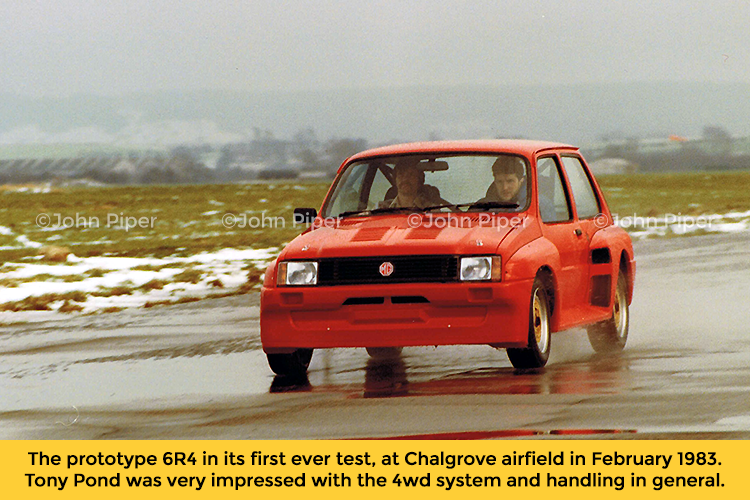 Thereafter, ARG Motorsport competed in selected rounds of the 1986 World Championship but with varying success. Ultimately, Group B itself was banned following a series of accidents that year and, as a consequence, the 6R4 was left to compete in rallies where homologation was not required. Its ‘Clubman-specification’ version proved popular with amateur rally drivers for many years thereafter. [Indeed, in the Manx National Rally of 1998, 6R4’s came 1st., 3rd., 4th and 6th. (a Subaru Imprezza was 2nd.) and some 14 were seen competing at a national rally in March 2009 to celebrate the 25 anniversary of the car’s first event.] How many other competition vehicles are able to say that they can still compete on even terms with present-day machinery this long after their creation? Now 30 years on, it would seem that they continue to do so. If no other, it still holds the record for the largest number of examples of a Williams design built, outnumbering F1, F2, Touring, Le Mans and road-going demonstrator cars. For something conceived as a fill-in study, that is quite some record. 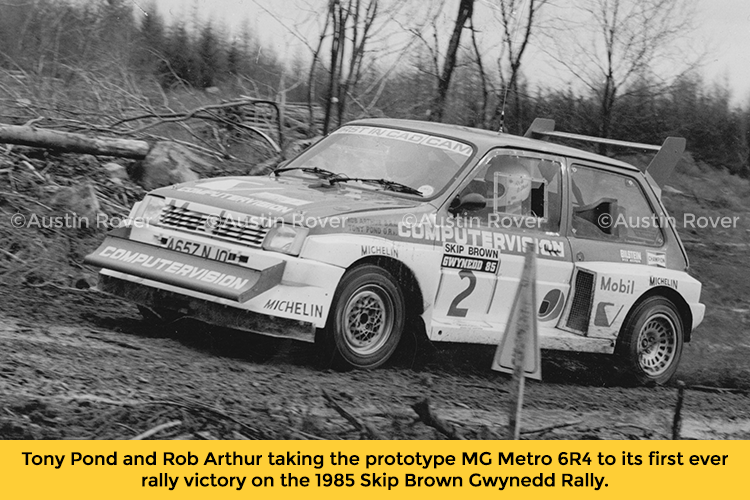 Many thanks to Brian O’Rourke, who was one of the two Williams Engineers that worked on the 6R4 design (and is still with the Williams team to this day) for writing this article for 6R4.net. Thanks also to Jonathan Williams at Williams F1 for his help.