What are the basic differences between a 'Clubman', and an 'International' specification MG Metro 6R4?...

Well the differences really are quite enormous, but to keep this comparison simple we will deal with the basics: engine; transmission; interior; materials; performance.

To qualify for the Group B rally class of the early-mid 1980s, car manufacturers were required to produce (and get checked and counted by FISA - the International sporting body for motorsport) 200 identical road-going versions that they would then use (as a basis) for their International rally cars entered on the World, and other International Rally Championship qualifying events across the globe.

The 200 road-going cars were known as the 'homologation' examples. In the case of the MG Metro 6R4 these were called the 'Clubman' cars, and were available for the general public (or aspiring rally drivers) to purchase direct from Austin Rover for approx £34,800 +VAT (as at April 1986). Additional to this figure, manufacturers were also able to produce a series of modifications or upgrades to enhance the performance and reliability of the 'homologation' cars that would then make them a far more competitive (and theoretically, reliable package!) on the International the rally scene. These modifications or upgrades were known as 'evolutions', and manufacturers were required to produce (and get checked and counted as previously...) 20 identical sets of these modified or upgraded components. In the case of the Metro 6R4, once a 'Clubman' car had been fitted with these modifications or upgraded components, they were called an 'International' car, and would be much more suitable to take on their rivals on the World rally stages - the cost of which would be approx £12,000 +VAT (as at April 1986). For the Austin Rover Motorsport works team at Cowley, these cars would be driven by the likes of Tony Pond, Malcolm Wilson, Marc Duez, David Llewellin, etc, as they took on the might of Audi, Ford, Lancia & Peugeot, etc. 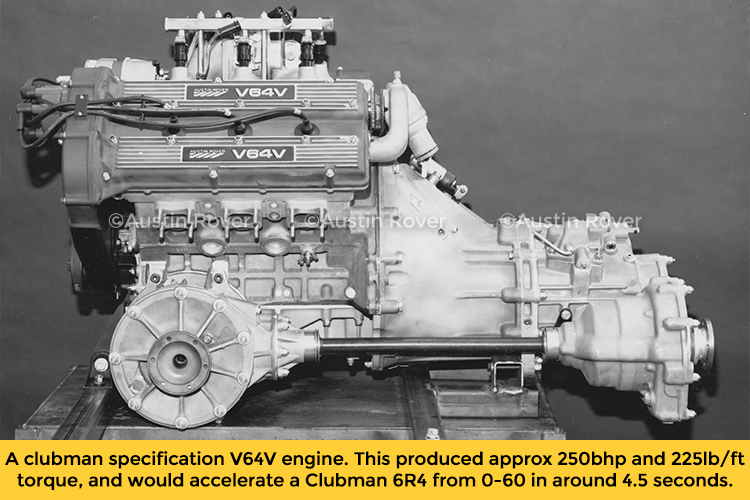 The major mechanical difference between a 'Clubman' and an 'International' spec Metro 6R4 was the power output, with the 200 'homologation' versions putting out a very respectable 250bhp and 225lbft of torque - due to it's single butterfly injection, and milder cams - in comparison to the far more healthy 'evolution' versions which gave 380-410bhp and 270lbft of torque - due to their individual throttle bodies, much more aggressive cams, and the obligatory Lucas Micos ECU remap, amongst other things. 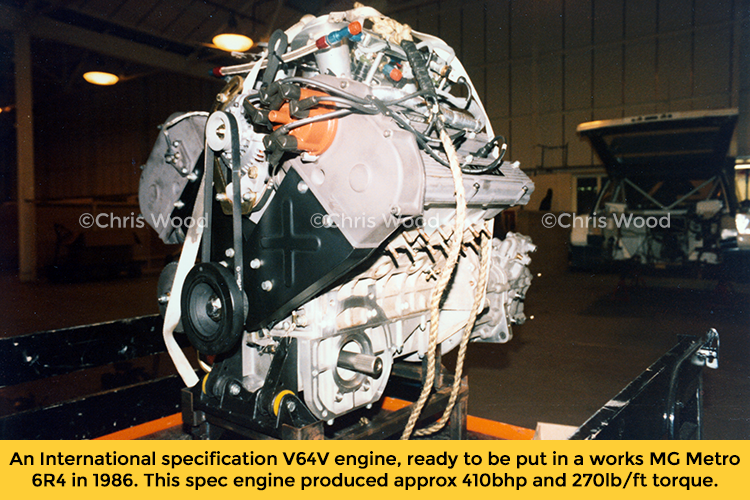 Apart from the aforementioned basic Austin Rover V64V engine differences between the two models, another major area where they differ mechanically is the gearboxes - the 'Clubman' cars using a fully synchromesh unit, whereas the 'International' cars used a vastly quicker, and very much stronger 'dog' gearbox with synchro on reverse only.

Entering a 'Clubman' car via steel doors fitted with glass windows, you are instantly greeted by a standard MG Metro dashboard and steering wheel, vinyl Austin Metro door cards, and some grey fabric covered, hip hugging, Cobra bucket seats - all of which were fitted to every 'Clubman' car at Longbridge during the August-October 1985 production run. 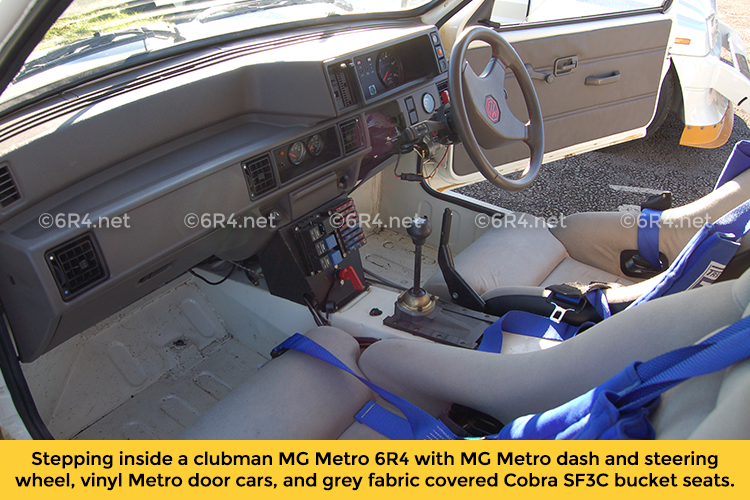 Entering a full 'International' car, and you are met with a completely different picture altogether. Having opened the considerably lighter stripped out kevlar door shells fitted with perspex windows and competition sliders, you are greeted by a carbon fibre dashboard with the instrument binnacle positioned in front of the co-driver, a competition steering wheel, and lightweight kevlar competition bucket seats. The only gauge angled towards the driver was the rev counter - the rest was the co-driver's responsibility. 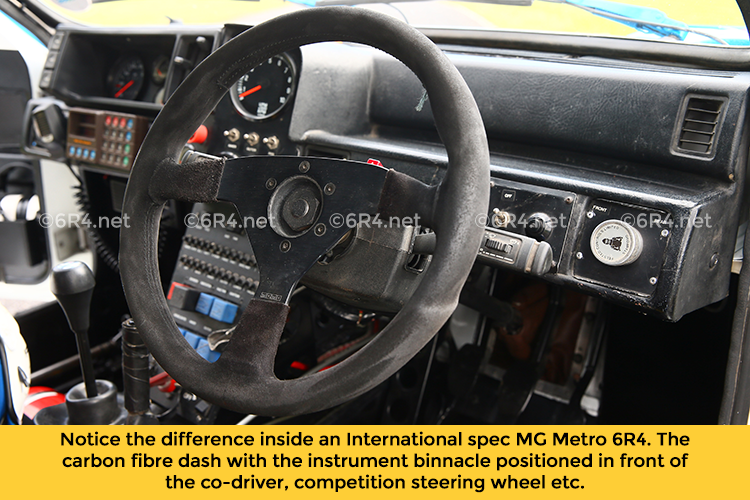 Material wise, the 'Clubman' cars featured wheelarches, door pods, sills, front bumpers, bonnet and tailgate constructed from glassfibre, whereas in the interests of strength and weight saving, all of the glassfibre panels were replaced by reinforced kevlar panels on the 'International' versions. Every Metro 6R4 featured a pressed aluminium roofskin, and front and rear aerofoils also made from shaped and pop-rivetted aluminium, although the profiles were different between the 'Clubman' and 'International' cars. 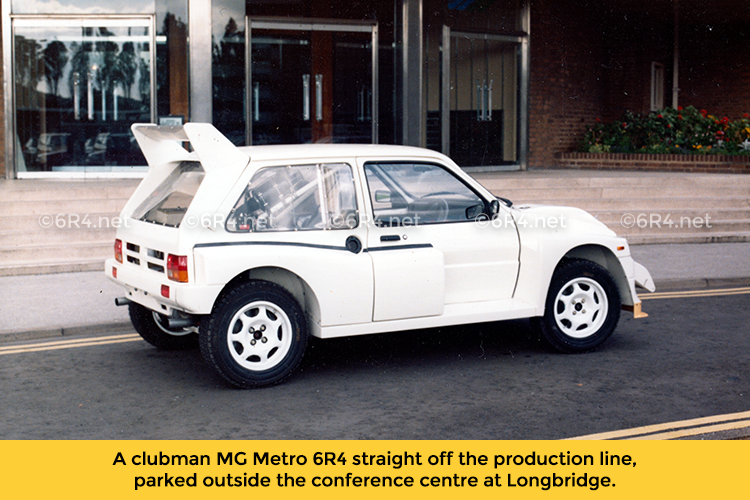 Autocar magazine dated 2 April 1986 tested both versions of the Metro 6R4 on smooth tarmac, and despite the obvious power differences between the 'Clubman' and 'International' cars, the former certainly didn't disgrace itself: 0-60mph was 4.5 seconds for the former, and 3.2 for the latter; 30-50mph (in top gear) was 3.4 seconds for the 'Clubman', and a slightly slower 3.5 for the more powerful 'International', however it was at higher speeds that the increased performance of the latter really showed, as it recorded a time 1.2 seconds quicker from 70-90mph - 2.8 seconds instead of 4 for the 'Clubman'. Autocar also remarked that "In particularly slippery conditions, where traction is at a premium, or on very tight twisty stages, there is apparently very little to separate the two cars, thanks to the suppleness of the Club(man) engine's power delivery". 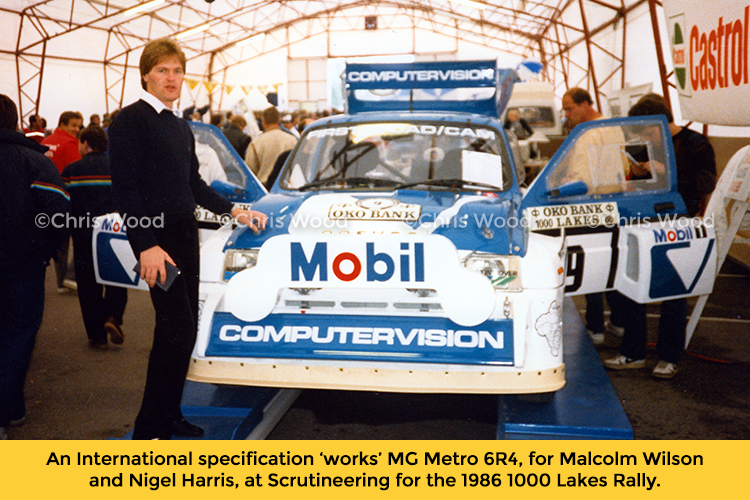 The 'Clubman' Metro 6R4 was certainly capable of winning National level rallies - straight from the box! - due to it's slightly 'softer' nature making it an easier car to drive quickly than the full-blooded 'International' version.

Those are the basic differences between a 'Clubman', and an 'International' specification MG Metro 6R4.